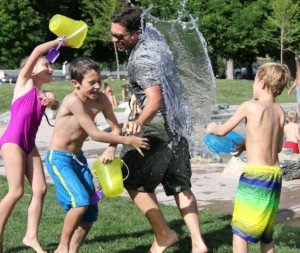 After you read this, you’ll be convinced that sometimes, childless people are heavily qualified to dole out parenting advice!

But first, are you one who believes that people who’ve never had children are out of line for giving parenting advice?

According to this line of reasoning, any person who’s raised kids is qualified to give parenting advice. But come on, we know this is so far from the truth. Would YOU take parenting advice from Britney Spears, Kate Gosselin, Mama June or Bobby Brown?

Think of one of the most selfish, narcissistic, impatient and uncaring adults you know. Does that person have kids? What kind of parenting advice do you think they’re capable of giving?

It doesn’t make any difference if this latter group has raised 10 children. This quantity simply means they’ve imposed their crippling traits on 10 kids, not zero.

“A person does not have to have walked in another person’s shoes in order to give them advice,” says Stacy Kaiser, a southern California-based licensed psychotherapist and relationship expert with a special interest in the topic of bullying.

“You do not have to have been an alcoholic to have suggestions for someone who drinks too much,” continues Kaiser with this analogy. “Similarly, you do not need to have a child to offer up parenting suggestions.”

Or as the saying goes, One need not be wearing your shoes to see that your shoelaces are untied.

It’s important to note that Kaiser says that “having lived the experience of being a parent, one does pick up tools and ideas that they may not have had,” in the absence of parenthood.

You may know of someone who has five kids and want parenting advice from them simply based on this.

My brother sought parenting advice, prior to having children, from a psychiatrist who had no children.

My brother’s three kids are among the most self-confident, emotionally stable human beings I’ve ever met. They are what you’d say are “going somewhere big in life.”

Still think people without kids have no business telling others how to raise theirs?
Whom would you want as your young child’s nanny?

Or a same-age woman who’s never had kids—but, is very tender, calm, patient, warm and cozy to be around, is quick to praise and is fun-loving and kind-hearted? The answer is a no-brainer.

Sometimes, a childless person is in a prime position to give parenting advice simply because they are skilled at creative problem solving. Sometimes they simply have common sense.

Sometimes it’s because their parents made enormous mistakes. An example might be a man named “Rob” giving advice to a buddy, “Steve,” who has a 13-year-old son on how to handle the son’s complaints that he’s getting bullied at school.

Maybe Rob was brow-beat by his father for being a “wimp” at school, and this made him even more vulnerable to the bullies, feeling more powerless.

This poor guy, as an adult, may very well have stellar advice for Steve that could lead to empowering the 13-year-old.

Isn’t it funny that the criticism of, “What do YOU know? You don’t have kids!” never applies to when the childless person gives advice that the parent actually agrees with? Now that’s something to really reflect upon!

An adult is either a bad person or a good person. Having kids usually will not alter that status.

With so many parents out there “screwing up” their children, how can anyone denounce the concept of childless people giving parenting advice?

With over 100 TV appearances on major networks including CNN, NBC, CBS and ABC, Stacy Kaiser brings a unique mix of provocative insight to many topics such as anger management, office relationship issues and parenting.