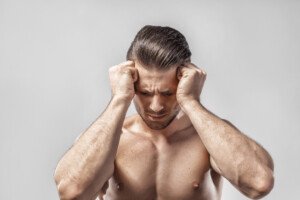 A headache expert describes the difference between ruptured aneurysm head pain and that from an acute subdural hematoma.

“Headaches related to ruptured aneurysm can be difficult to distinguish from that of a subdural hematoma,” says Noah Rosen, MD, Director, Northwell Health’s Headache Center in Great Neck, NY.

What a headache from a ruptured aneurysm has in common with the head pain from an acute subdural hematoma is that both are very intense — often described as a thunderclap headache.

However, in the case of a ruptured aneurysm, the thunderclap is more pronounced and sudden, like BOOM!

This is easy to understand when you visualize the aneurysm suddenly rupturing or bursting, spewing blood onto the brain.

“This can include bleeding such as that of a subarachnoid hemorrhage, intracerebral hemorrhage [hemorrhagic stroke] or epidural or subdural hematoma.”

In fact, the more specific term of the condition associated with a sudden, roaring headache is acute subdural hematoma. 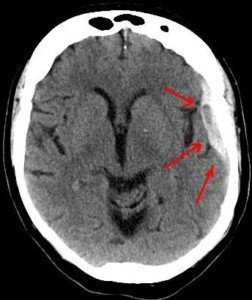 But often, the term “acute” is left out. “Acute” means sudden, as in head trauma resulting from going through the windshield of a car.

In the case of a chronic SDH, the bleeding in the brain is very slow—so slow that eight weeks may pass before the patient begins developing the first symptoms.

The symptoms are not immediately life-threatening in the chronic type.

In the case of my mother, her surgery to drain her chronic SDH was scheduled for the morning following her early evening admission to the hospital.

Her first symptom (a severe but non-thunderclap headache) came six weeks after hitting her head in a fall.

Dr. Rosen explains, “Acute subdural hemorrhage often presents as a thunderclap headache due to rapid expansion, irritation of local blood vessels and the meninges (or covering of the brain).”

Headache of a Ruptured Aneurysm

“They are also thunderclap in onset, are generally associated with more rapid loss of consciousness or other focal neurologic deficits,” says Dr. Rosen. 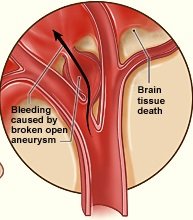 Whether ruptured aneurysm or (acute) subdural hematoma, both conditions require “immediate emergency evaluation and neuroimaging (such as a CAT scan) to determine the next course of action.”

The way these headaches feel to the patient, then, may be indistinguishable.

However, one of the hallmark features of an acute subdural hematoma is a type of vomiting called projectile.

An example: If a football player takes a very hard hit in the head and is walked off the field, sitting there on the sidelines dazed, and then suddenly vomits in a projectile path, chances are high that there is rapid bleeding in his brain. This is a medical emergency.

Dr. Rosen’s career is dedicated to treating what he believes is an underserved patient population: those with migraine and other headache disorders.