Do Teens Get Abdominal Aortic Aneurysms? 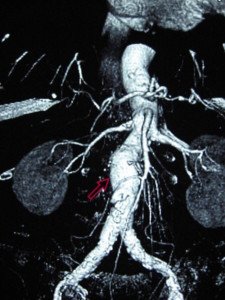 “Abdominal aortic aneurysms are extremely rare in teenagers and adolescents,” says Akram Alashari, MD, a trauma surgeon at Geisinger Medical Center in PA, and author of “THE POWER OF PEAK STATE.”

Dr. Alashari explains that if an abdominal aortic aneurysm is present in a teenager, it “may be associated with inflammation or a genetic connective tissue disorder.

“Genetic disorders that are associated with abnormalities of the aorta include Marfan syndrome and Ehlers-Danlos syndrome.”

If your concerned about the health of your teenager, an abdominal aortic aneurysm should rank very low on your list—in fact, it shouldn’t even be on the list, assuming that your teen has not been diagnosed with a connective tissue disorder.

What should rank high on the list is instilling in your teenager safe driving habits and a very strong aversion to smoking and drinking.

“Ultrasound screening studies have shown that 4 to 8 percent of older men have an occult AAA,” says Dr. Alashari.

“However, AAAs found on screening are generally small; those measuring ≥5.5 cm or greater are found in only 0.4 to 0.6 percent of those screened.

“Because the incidence of AAA rises sharply in individuals over 60 years of age, the future prevalence of AAA could increase substantially in association with the aging population.”

The repair of an abdominal aortic aneurysm via catheter rather than open abdominal surgery is becoming more common.

And by the way, if your still worried about your teenager’s health, encourage him…or her…to take up strength training. It does wonders for the body AND mind.