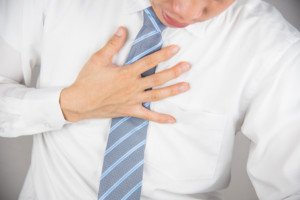 Here is what a gastroenterologist explains might explain chest pain, left arm symptoms and burping all occurring together, which means that a heart attack must be ruled out as soon as possible.

Once a cardiac cause is ruled out (which is a priority), then a most likely cause is “disordered motility,” says Michael Blume, MD, a gastroenterologist at MedStar Good Samaritan Hospital, Baltimore.

This simply means a spasm involving the stomach or esophagus.

The esophagus is located behind the breastbone, so that’s why a spasm can present as chest pain.

“This type of symptom can mimic cardiac symptoms and can be rather frightening,” says Dr. Blume.

“It is always prudent to exclude cardiac causes for this prior to addressing gastrointestinal issues.”

The following can lead to the disordered motility: metabolic or biochemical problems, side effects from certain medications, and even stress and anxiety.

Dr. Blume says that a spasm in the esophagus may cause a tight or full feeling.

The spasm causes swallowed air not to “progress normally,” and the result is the burping.

“Because the esophagus has a similar innervation as the heart, it can often present with symptoms in similar locations.”

This explains why there might be accompanying arm numbness. “Innervation” refers to the electrical firing of a nerve that causes muscle contraction.