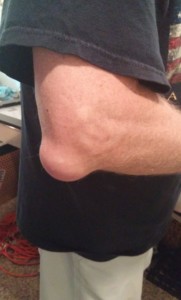 As funny and goofy as Popeye’s elbow looks, one has to wonder if this bizarre condition always comes with pain.

Though Popeye’s elbow (olecranon bursitis) is associated with pain, it can also be painless—as in completely.

I know this because my mother was recently diagnosed with Popeye’s elbow. There’s a superball-sized “bump” at the joint.

It’s soft (because it’s an inflamed sac that’s filled with fluid of the bursa).

And as much as it looks like the classic Popeye’s elbow, it’s 100 percent free of pain.

It’s not even tender or sore. She noticed it only when she just happened to look there shortly after awakening in the morning.

It doesn’t even hurt when she’s sitting at a table leaning on it (which is the obvious cause).

My mother’s Popeye’s elbow doesn’t hurt at all when she or I touch the affected area.

Nor is there any pain when she flexes or extends the joint, carries groceries or works in the kitchen.

The physician’s assistant told her to just let time dwindle down the inflammation. It wasn’t even red.

The PA told her it may take days, a few weeks or even a few months for it to go down, but in the meantime, she could put a band around it.

So yes, it is possible for olecranon bursitis to come without any pain. If you see someone with Popeye’s elbow…don’t assume that it hurts just because it looks so strange.