Pills Stuck in Esophagus vs. Perception of Being Stuck 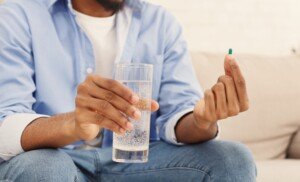 Is there a way to tell if a pill is actually stuck in your esophagus vs. it just feels that way? Not necessarily.

“This is a something that is not well-understood,” says Jay Desai, MD, who specializes in colon cancer screening, upper endoscopy and consultative gastroenterology at the New York Gastroenterology Associates.

Dr. Desai continues, “Feeling like something is stuck in your esophagus when it isn’t is called globus sensation.

“The perception of a stuck pill may be related to what we call motility disorders, which are disorders of the muscles and the nerves of the esophagus and the coordination of those muscle contractions.”

So why does it seem that pills, more often than food the same size (such as beans, peas, raisins and chunks of carrot, celery and nuts) get stuck behind the breastbone (sternum)?

“Pills tend to get stuck in the esophagus because the consistency is denser, whereas food tends to be on the softer, more pliable side,” says Dr. Desai.

“If there are certain lesions, such as rings or webs, which are common structural abnormalities in the esophagus, then solid items that cannot slip past these will get stuck.

“Certain pills are more dangerous if caught in your esophagus, such as antibiotics, specifically tetracycline — which is taken to help reduce acne, and common medications for osteoporosis.

“These medications are more concerning because if these pills do get stuck, they have the potential to cause life threatening ulcers.”

What about the mere sensation of a stuck pill in the esophagus or behind the breastbone?

What can lead to this feeling or perception?

“There are many conditions that can cause the globus sensation,” begins Dr. Desai.

“First, any mechanical narrowing of the esophagus, such as rings or webs, which are common structural abnormalities in the esophagus, can cause this sensation.

“Second, motility disorders, which are conditions where the muscles of the esophagus do not work properly and fail to push food down well, also create the sensation of a stuck pill.

“And finally, achalasia, a condition where the valve at the bottom of the esophagus doesn’t relax or open properly, causes pills/food to get stuck.”

You can lower the chances of something getting trapped in the “food pipe” by swallowing pills, tablets and capsules with your head slightly downward.

This seems counterintuitive, but this positioning helps keep the passageway open more.

Think of how you swallow food to get it down. You don’t throw your head back, do you?

In fact, if you’re eating while reading, your head is down while you’re swallowing.

Apply this same concept to swallowing pills for medications or supplements.

They’ll go down easier and will help prevent that stuck sensation. And don’t lie down for at least two hours after swallowing them.