Falling from a Standing Position to the Floor in the Elderly 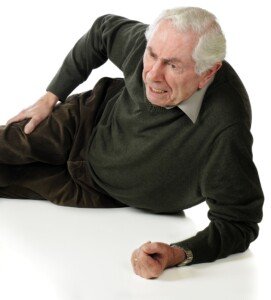 A fall in an elderly person from standing to the ground is deadlier far more often than you may think.

“Slip-and-fall” accidents may be the fodder of reams of personal injury lawsuits, but for the elderly, they are serious business, and fatal significantly more often when compared to non-elderly people, says a study.

When an elderly person takes a fall from a standing position and hits the floor or ground, this can kill them, and if this worries you, don’t let anyone convince you your imagination is overactive.

My father thought my imagination was overactive when I kept expressing concerns about my mother (elderly) taking a fall due to her frequent blackouts while standing (severe orthostatic hypotension).

Well, one day it finally happened (because I wasn’t present to prevent it), and six weeks later, she paid the price in the form of a brain bleed that had to be surgically drained.

A report in The Journal of Trauma: Injury, Infection, and Critical Care stresses the seriousness of short falls in the elderly.

It seems like a no-brainer to say that elderly people are less likely to survive a short fall than are younger individuals.

But the elderly are three times more likely, says the study (over 57,000 patients), to die from a short fall than are people under age 70.

The report points out that short falls should not be underestimated in the elderly, and that about 30% of people over 65 suffer from a fall every year.

What makes the potential for death or permanent disability greater is if the person loses consciousness while standing, and then falls, obviously unable to help break the fall due to lack of awareness. This puts them at very high risk for head injury.

My aunt took a short fall, broke her hip, then succumbed to postsurgical pneumonia.

The study found that about 4.5 percent of elderly individuals died after a short (ground-level) fall, whereas the death figure for those under age 70 was 1.5 percent.

Of survivors, the elderly stayed in the hospital longer, and just 22 percent were able to function independently after discharge. The figure for people under 70 was 41 percent.

Nevertheless, almost 75 percent of elderly people are not severely injured from short falls.

Unfortunately, some elderly people think they’re in this 75 percent group and thus don’t take all the safety precautions they should.

Fall Prevention Tips in Your Home

“Utilize assistive devices (walker, cane, crutches) and get instruction on proper use from a physical therapist.

“Have vision, hearing and balance assessments at least yearly.

“Get active. As people age they tend to decrease their activity and become sedentary which also increases risk for osteoporosis [brittle bones].”