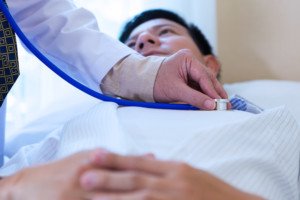 Yet another study shows the value of the CT angiogram in distinguishing ER patients with cardiac chest pain from those with non-heart related chest pain.  The report appears in the July 26, 2012 New England Journal of Medicine.

“We found that the use of CCTA in emergency department evaluation of acute chest pain very effectively identified which patients did or did not have coronary artery obstruction, allowing clinicians to focus the use of resources on patients with heart disease,” explains Udo Hoffmann, MD, and director of the Cardiac MR PET CT program at Massachusetts General Hospital.

Despite this compelling finding, however, if you walk into an ER complaining of chest pain, you will not undergo the CT angiogram.

Instead you’ll get a chest X-ray, ECG and a blood draw for a heart enzyme  –  like my mother did on several occasions when her symptoms included the possible differential diagnosis of heart attack.

Had she been given the CT angiogram on her first visit, she would have been admitted instead of sent home.

The heart enzyme test, ECG and chest X-ray were normal, but a catheter angiogram several days later revealed very severe coronary artery blockage  —  something that a CT angiogram would have picked up.

The catheter test came about because a few days after her first ER visit, she went to the ER again, and this time, the heart enzyme result was abnormal.

Nevertheless, this experience illustrates to me how practical the CT angiogram would be. The heart enzyme test takes 5-6 hours to get a result.

Could the standard use of the CT angiogram for chest pain ER visits prove too costly?

The report states: “Although the use of CCTA added to the amount of diagnostic testing used in the evaluation process, compared with current standard protocols it significantly reduced length of stay without increasing costs.”

Though lack of a CT angiogram may seem like no big deal since my mother’s second ER-visit heart enzyme test was abnormal and that got her the admission, it was also possible that during the interim (between when my mother was sent home after the first ER visit, and when she was admitted the second time), my mother could have had a fatal heart attack.

Furthermore, in the interim between being admitted the second time, and her quintuple bypass surgery, she could have had a fatal heart attack. What if a heart attack had occurred during these interims?

It would have been a heart attack that could have been prevented had a CT angiogram been conducted in the first ER visit  —  thereby hastening the quintuple bypass surgery by 2-3 days.

How do I know my mother could have had “the big one” during those interims?

Because her catheter angiogram showed such serious blockage that the physician immediately contacted a cardiothoracic surgeon, who was there within 45 minutes.

Two hours later my mother was under the knife, but not before this surgeon, plus two other doctors, told me that without the surgery, my mother would likely have a massive heart attack within a week.

“Showing at a variety of clinical sites that CCTA is at least as good as standard ED evaluation without increasing costs elevates the procedure from one appropriate only for specialized settings to one that can be applied in many centers,” says Dr. Hoffman.—