Painful Sex, Vaginal Pain: Q & A with a Medical Doctor 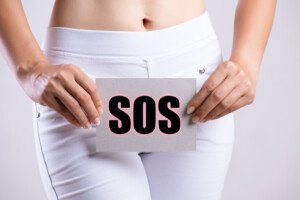 Painful sex is a problem for more women than you think. Some women fake sexual pleasure to please their men, but other times, the pain during sex is so agonizing that these women avoid sex at all costs.

When women don’t know why they have painful sex, they are more apt to believe the problem is “all in their head.”

But painful sex is a real problem that’s in the genital area, NOT a woman’s head.

If you suffer from painful sex, it has a name: DYSPAREUNIA, of which vestibular vulvodynia is a possible cause.

Vestibular vulvodynia describes a condition that afflicts many women in varying degrees.

The degree of pain during sex can vary, from minor discomfort to excruciating.

In fact, in severe cases of painful sex, the pain has been described as feeling like a steak knife is being jammed through the vaginal entrance. In severe cases of vestibular vulvodynia, sexual relations are not possible.

Just what is VV?

Vulvodynia is a condition of chronic pain and discomfort in the vulvar area.  It is considered to be a pain disorder and the exact etiology (cause) is unknown.

It has been associated with a prior history of certain conditions such as chronic yeast infections, allergic reactions, low estrogen levels, trauma or injury to the vulvar area, and even genetic factors and sexual abuse.

Why is it so painful?

While the exact cause of the pain is unknown, there are theories that women with this problem have suffered some type of nerve damage to the sensory nerves in this area, which results in chronic and sometimes debilitating pain.

It may also be possible that they have developed a state of “hypersensitivity” from prior insults such as chronic infections or allergic reactions.

Vulvodynia is also reported in postmenopausal women, so there may be some link to low estrogen levels as well.

Whatever the cause, it is real pain for these women and has real impact on their overall quality of life.

Can VV be so painful, that it outright prevents a woman from having sex?

Vulvodynia is often so painful that it prohibits women from enjoying a healthy sexual relationship.

Many women can no longer engage in any sexual activity because mere contact with that area results in excruciating pain.  This has been and continues to be a major quality of life issue for VV sufferers.

Furthermore, many of these women cannot engage in regular exercise, they cannot use tampons, they cannot wear certain clothing, etc.

Many women refrain from openly discussing this delicate issue with others, so they often feel isolated, “different” and may even suffer with depression.

One step in the diagnosis of VV is the “Q-tip” test. This is a simple procedure done in a doctor’s office whereby a Q-tip is gently applied to the vulvar area. This alone is enough to provoke “pain” in these patients.

The doctor may then go onto “mapping” the pain and its intensity.  This test also helps to distinguish if the patient has generalized VV or localized VV, which is referred to as vulvar vestibulitis syndrome.

How do patients describe this pain? Men have a difficult time understanding that even a lubricant and painkillers won’t help.

This is a chronic pain disorder with no known cause and no known cure.  The pain is described in many ways, but the most common is: a burning pain.

Other descriptions include: stinging, rawness, aching, throbbing and sometimes itching.

Whatever perception of pain women may have from VV, it is certainly not easily remedied.

Is it possible that vestibular pain can be all in a woman’s head, perhaps from past sexual abuse?

The psychological and emotional affects that sexual abuse have on women are varied and far reaching.

There are cases of vulvodynia where a prior history of sexual abuse is notable.

However, sexual abuse is also associated with some aspects of sexual dysfunction such as dyspareunia (painful intercourse) and vaginismus (strong muscular spasms of the pelvic muscles with sex often preventing penetration and vaginal intercourse).

Is VV necessarily something that a woman has always had, since childhood (i.e., first becoming aware of it at age 13 when attempting to insert a tampon); or, can it sometimes just develop when she’s an adult?

VV can occur in women beginning with the teenage years.  However, it is more common in women after the third decade of life and more so in the postmenopausal years.

Are there known treatments?

Dr. Nardone received her medical degree from New York Medical College and has been in practice as an OBGYN for more than 20 years.