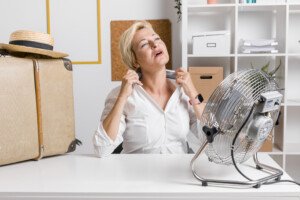 Finally, an effective treatment for hot flashes that does not involve hormone therapies and their negative side effects.

A promising study shows the effectiveness of a non-hormonal drug on hot flashes related to menopause and medications for breast cancer.

Makes you wonder why researchers never thought of this idea before: using a nerve block drug to stifle hot flashes.

A certain area of the brain regulates body temperature. The nerve block drug interrupts this process.

“This is the first effective, non-hormonal treatment for hot flashes,” says David R. Walega, MD. He is the chief of the Division of Pain Medicine at Northwestern University Feinberg School of Medicine, Chicago.

The investigation involved 40 women between 30 and 65 who were suffering from at least 25 hot flashes on a weekly basis.

Half the subjects received an SGB injection: stellate ganglion blockade, with a local anesthetic.

The injection was given in their neck, about two inches to the right of their larynx.

The other patients were given an injection of a sterile saline solution (without knowing it).

Both groups wore a core temperature monitor, which objectively measured changes in their skin conductants.

The participants recorded their hot flash frequency and were tracked for six months.

Results of the Study

In the women who received the nerve block drug, hot flashes (moderate to severe) were decreased by 50 percent.

“This is a fast, relatively painless, long-lasting and cost-effective treatment for hot flashes,” remarks Dr. Walega.

Nearly 80 percent of women in menopause suffer from hot flashes, notes the report.

The study also points out that the breast cancer treatment drug, tamoxifen, causes hot flashes as a side effect, and some women will actually quit taking this drug to avoid the hot, sweaty side effect.

The nerve block so far seems to be a very smart, reasonable alternative to the typical hormone “therapy” treatments that women get for hot flashes. Hopefully, the SGB injection will become a standard treatment very soon.