How to Easily Put a Muzzle on a Dog 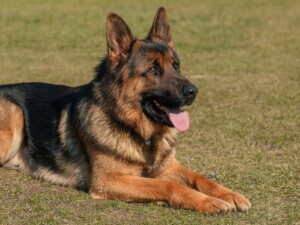 Getting a muzzle on a dog can be a real bear, especially if the dog is a large breed.

Twice a day I put the device on my parents’ German shepherd, so that I can give him a series of injections without getting bitten.

For those of you who need to put a muzzle on your dog, but are met with a lot of exuberant resistance in the effort, don’t give up yet; there is hope.

You can desensitize your dog to the muzzle by placing a morsel of food inside the device, then bringing it to the dog’s snout.

Your pet will see and smell the treat and will go for it as you slip on the muzzle.

Do this several times or so and the dog will associate the muzzle with something positive: food.

With this new association, your pet will no longer fight being muzzled. However, this doesn’t mean you’re out of the woods.

My parents’ dog associates his muzzle with raw beef, but this association was forgotten when we were at the vet clinic and I tried to get the device on him.

He absolutely refused to let me put it on, and it took several minutes to finally succeed  —  after I put a dog “cookie” in the device.

A week later it happened again at another vet clinic, but this time the task was impossible because our pet would not close his mouth.

Thus, the desensitization that occurs at home won’t necessarily carry over to the vet’s office.

Another trick in getting a muzzle on a dog is to put the unit on the animal while standing behind him. This way, he won’t be able to take a nip at you.

In addition, move slowly. Don’t use sudden hand movements or rapid gestures. Move in slow motion and speak in a soothing voice, rather than in an irritated, frustrated, angry or authoritative tone.

If right after you get the muzzle on the dog, you then follow up with an unpleasant experience to your pet, he will associate the device with that negative experience, even if you put food inside of it.

For example, if I were to proceed with the injections right after putting the muzzle on my parents’ dog, he would associate the device with the pain of the injections, raw meat or not.

I wait 30 minutes after putting the device on before I start giving the shots.

This way, the animal will never make the connection between muzzle and injections.