Are Hoarding and Obesity Linked? Can Hoarders Self-Treat? 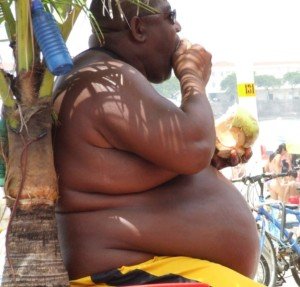 Is there a link between hoarding and obesity?

Seems that most, if not all, hoarders are obese; you may have drawn this conclusion after seeing TLC’s “Hoarders: Buried Alive,” or even mere previews to this reality show.

This isn’t to say I’ve never seen a hoarder who wasn’t obese or overweight, but weight problems sure seem quite common among hoarders.

“We do have some evidence of overweight in our hoarding sample drawn from an internet study,” says Gail Steketee, PhD, Dean and Professor, Dean Emerita and Professor Emerita, Boston University School of Social Work, and co-author of “Stuff: Compulsive Hoarding and the Meaning of Things.”

“However, we know almost nothing about whether these are related to each other (hoarding and obesity), or whether hoarding is related to more general health problems, or both are connected through a third variable we don’t yet understand.”

I have never seen a hoarder who looked like a gym rat, and this includes the few I’ve seen on TV who would not be classified as overweight.

Despite not being obese or overweight, the smaller hoarder nevertheless appears to be in dismal physical condition.

Do you wonder what percentage of hoarders, obese or not, adhere to a solid exercise program?

It would be interesting to know how effective an exercise program would be in treating this compulsive behavior.

Another issue that I have wondered about is whether or not such an individual can treat the condition on his own, that is, become so sick of it one day that he or she decides to do something about it —  without any intervention.

I’ve read about people with anorexia nervosa and bulimia who treated their conditions successfully without intervention.

There are also former drug users who one day awakened to realize that they couldn’t keep going on like that, and outright quit drugs cold turkey.

Can a person quit collecting junk, garbage and used items cold turkey, or at least employ a taper-down strategy (gradually discarding the clutter) of self-treatment?

Dr. Steketee explains, “I’m sure it is possible but it seems to be pretty rare. Of course, people who fix their own problems are not featured on TV, as there is nothing to show, and they don’t show up in our treatment clinics because they don’t need us, so we wouldn’t meet these people in the course of our work.

“It’s important to consider what we are not seeing and whether it might be there, but simply unknown to us.”

So if there are people out there who used to be hoarders, especially if they’ve always lived alone, it’s quite possible that at some point, a rude awakening inspired them to do away with all the clutter, whether it was over a short period of time or a longer timeline.

As for the obesity issue being linked to hoarding, more research is needed.

Dr. Steketee has conducted research not only in the assessment and treatment of hoarding disorder, but also cognitive and behavioral treatments for anxiety disorders, obsessive compulsive disorder and body dysmorphic disorder.