Why Parents Tell Kids to Ignore Bullying & Why It Fails 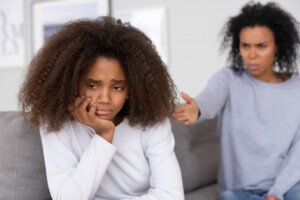 It’s a whopping myth that ignoring bullies makes them go away, so why do parents give this bad advice to their kids?

If your child is a victim of bullying, and you’re tempted to go the easy route by telling him or her, “Just ignore it,” you must seriously reconsider this approach.

“Although removing the reinforcement and attention from bullies should make them stop their harassment, it is not so simple,” says Rona Novick, PhD, who developed the BRAVE bully prevention program.

How would these parents feel if, upon reporting to the human resources department that they were being sexually harassed by their boss, the HR manager told them, “Just ignore it”?

Can you say lawsuit?

Yet kids are told to ignore bullies!

Why is harassment to adults at the workplace worthy of a million-dollar lawsuit, but when it applies to kids at school, they should be expected to possess the psychological strength to “just ignore it”? What is this world coming to?

“Parents often tell victims to ignore bullying, hoping that if their child (the victim) does not give the bully the satisfaction of showing they are hurt, the bully will cease and desist,” says Dr. Novick.

Only a robot can hide feelings of hurt on their face and in their body mannerisms and speech patterns.

“In reality, bullies get very locked into their power dance with victims,” she continues.

“This means that when a victim does ignore (and by the way, since victims are often very reactive, this is extremely hard for victims to do), a bully will likely come back with escalating cruelty.”

Imagine the stress buildup in kids, even older high school kids, whose only weapon (or so they’ve been taught) is to continuously try to ignore verbal assaults at a place where they spend many hours, five days a week, nearly 10 months a year.

“Even the strongest of victims can rarely ignore consistently, so eventually, the bully gets the satisfaction of experiencing power over his/her victim,” says Dr. Novick.

“This strategy of ignoring has been so commonly reported in the popular media, and many novels, TV shows, etc., erroneously show it as effective, leading parents to buy into the myth.”

Most parents genuinely feel for their bullied kids, but just don’t know what to do, adds Dr. Novick.

And very unfortunately, there is a percentage of parents who just don’t want to bother with the task of figuring out a solution.

Telling kids to ignore bullies is perceived as a fast, quick-fix solution that relieves the parent of duties.

Can three words solve a big problem? Not likely. Telling a bullied child to “just ignore it” is like telling a 90-pound weakling to just hit a home run.

“Children need an array of strategies; they need to know to have friends and stay with friends, because being alone makes you more vulnerable,” explains Dr. Novick.