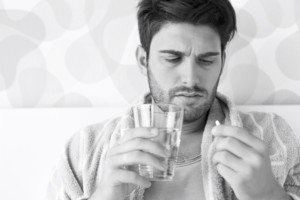 An antidepressant may work wonders initially but then may lose its punch and can’t keep up with the depression.

You may be on an antidepressant that’s been working wonderfully…

But then soon after you go on the prescription drug, it begins losing its full effect. It has pooped out: the “poop-out effect.”

The antidepressant that my mother was on for clinical depression seemed to start pooping out less than two weeks after starting it.

The drug was Cymbalta and the prescription called for 30 mg the first week, then 60 mg the second week.

Oddly, the doctor prescribed only 30 capsules with no refill authorization.

I consulted with my brother, who had been working in the pharmaceutical industry as a chemist for many years.

When an antidepressant poops out, this means it has lost its fire or power when it comes to subduing depression symptoms.

This doesn’t mean it’s lost all of its effect, but enough to cause concern in the patient and/or family members. The regression in my mother was noticeable.

With my mother, the poop-out effect took place on day 13 and day 14 of being on Cymbalta.

I assumed that she’d have to go up to 90 mg so that the drug could resume its full effectiveness.

I also wondered if her doctor would switch to a different drug, or, keep her on Cymbalta but add a second drug.

In the case of my mother, it turned out that the antidepressant hadn’t pooped out at all.

On day 15 she did great, and the next day we were in the doctor’s office.

The doctor explained that it takes a while for antidepressant drugs to take full effect.

Some days will be better than others, but as long as the overall picture looks good, then the drug is working.

On day 12, in the evening, my mother received some alarming news about a family member  —  a divorce, and I surmise that the shock had not sunk in that evening  —  until she went to bed.

Next morning she reported she hardly slept, having been kept awake thinking about the family member.

The second half of next day, my mother had what appeared to be the beginnings of a relapse into the depression. This repeated next day, and was worse.

But the day after, she was hopping. And I figured that the relapse had to have been related to news of the divorce.

Though my mother had setbacks, the drug was still working because without the antidepressant, she would have been debilitated, weeping and hardly eating.