Top 5 Injuries BIG Dogs Get When Exercised Too Much 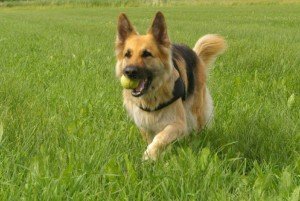 A veterinarian explains the most common injuries and problems that may affect a large dog when it’s exercised too much.

A large dog is prone to certain injuries or problems if he’s given too much exercise, such as being leashed to run alongside a bicycle over long distances.

The CCL is analogous to our ACL in the knee.

A twisting or jarring motion is often necessary to tear or rupture the CCL. However, some large dogs are more vulnerable to this injury due to genetics, obesity or age. 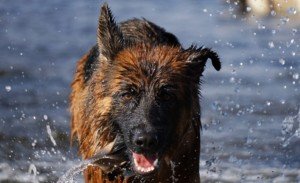 Here is what Dr. Benson explains: “Most dogs require surgical correction to get back on all four paws, and many benefit from pre- and/or post-surgical physical rehabilitation, just like humans!

#2     Next is lameness. There may be no visible reasons for this, notes Dr. Benson. An X-ray may be done to detect any broken bones.

If the X-ray is normal, a vet will likely advise a limitation on movement, certainly exercise, and maybe give a course of pain relieving medication.

#3     The third problem that can affect large dogs are exercised too much is broken nails. “Broken nails are not uncommon in athletic dogs and can occur on soft ground or hard surfaces,” says Dr. Benson.

Your vet may have to remove the end of a broken nail. The biggest risk from this is infection of the exposed soft tissue inside the nail, says Dr. Benson.

He further explains: “Since licking and chewing at the nail plays a major part in this, dogs with broken nails will often need to wear an Elizabethan collar (‘cone of shame’), and the nail will need to be kept clean.

“Keeping nails trimmed helps to avoid this issue, but dogs with recurrent broken nails may have underlying problems that your veterinarian can help diagnose and treat.”

#4     Lacerations and cuts are also more likely to occur the more a large breed (or any size) dog exercises outside.

One day I saw a man walking his large dog across the parking lot that led to a mountain trail head.

The dog was prancing with each step because on all four feet were special “booties” to protect paws from insults from the gravelly trail.

These can help, since too much wear and tear on paws can lead to cuts, abrasions or irritation, especially in cold weather, adds Dr. Benson.

#5     Heat stroke: “Over-exertion can lead to hyperthermia, or heat stroke, which can be life-threatening,” says Dr. Benson.

“A dog’s normal temperature usually peaks at around 102.5oF, but when it rises to 105-110oF, this can lead to coma, organ dysfunction and even permanent brain damage or death.”

Watch out for the warning signs which can be subtle, such as a drunken-like gait, restlessness, excessive panting or drooling.

Large dogs (and small) need structured exercise, but too much of a good thing can cause injuries or other problems.