How long would it take to reverse insulin resistance with diet and exercise?

So how long does it usually take to reverse insulin resistance with diet and exercise?

As far as how long it would take for insulin resistance to be reversed with exercise and an improved diet, there is no one-size-fits-all answer, says Craig Stump, MD, former chief of the UA Division of Endocrinology, Diabetes and Metabolism (2006 to 2016), University of Arizona, Southern Arizona VA Healthcare System.

He says, “Some people can reverse insulin resistance very easily.  I have seen people improve by just cutting out fast foods or taking up a moderate walking program.

“Significant improvements can be seen in as little as 2-3 months.  Indeed, a single bout of exercise in most people can improve insulin resistance for between a few hours to 24 hours.

“This is why it is often recommended that people partake in physical activity nearly every day.”

If you have not been exercising, and especially if your job has you seated for most of the time, then adding exercise to your life will be a significant variable in reversing insulin resistance if you have it. 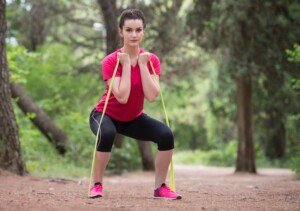 “When glucose is elevated above 100, this is evidence that the body can no longer compensate for insulin resistance,” says Dr. Stump.  Over 125 is considered diabetes.

However, it’s not that simplistic. One fasting glucose reading between 100 and 125 does not automatically get a person a diagnosis of insulin resistance.

Other factors must be considered, such as that person’s cholesterol profile, blood pressure and body weight.

A higher than normal fasting glucose reading may result from a bad night’s sleep the morning prior to the test, according to some preliminary studies (i.e., Spiegel et al).

Thus, if you plan on taking a fasting glucose test, make sure that it follows a good night’s sleep.

In an attempt to reverse insulin resistance, which is a major risk factor for type 2 diabetes, a person may not be getting the desired results, despite seemingly doing everything he or she is supposed to be doing. This includes a failure at weight loss.

Failure to lose weight can result from inefficient exercise. For example, a man at the gym reported to me that he was not able to lose weight, despite using the treadmill faithfully.

One look at him while he was walking on the treadmill, and I instantly knew what the problem was:

He kept holding onto the equipment, and thus, wasn’t really walking at all, but just gliding through supported motions.

I told him to swing his arms; he lost eight pounds in one month without caloric reduction.

Dr. Stump says, “Some people tend to eat more (imperceptible) when they begin an exercise program (although they swear up and down that they are eating no different).”

This will interfere with weight loss attempts, and losing weight is so important for reversing insulin resistance – if you’re overweight, that is.

“This is nearly impossible if high caloric density foods such as fast food are plentiful.

“Other recommendations that are made are to avoid simple sugars and starches (white noodles, white rice, white bread and flour).

“Rather, it is advised to consume more complex carbohydrates and to mix these with protein and fat in a given meal.

“However, these are not uniformly accepted or recognized by medical and nutrition specialists as being effective.”

On the other hand, the fitness-professional industry swears by this protocol, that carbohydrates should be eaten with protein and “good” fats.

So if you want rice (wild, brown or basmati), have an egg white omelet cooked in olive oil with it, or a handful of nuts.

Plus, the best time for your body to metabolize any kind of carbohydrates is within 30 minutes or so of hard exercise.

To reverse insulin resistance, practice these guidelines and then have another fasting glucose reading taken (after a good night’s sleep) after a few months to see if there’s any improvement.

research interests included insulin resistance resulting from physical inactivity, obesity and the metabolic syndrome, and identifying biological markers to predict progression of diabetes. Dr. Stump passed away in May 2019 after a brief illness.