The Youngest a Child Can Get Melanoma Skin Cancer? 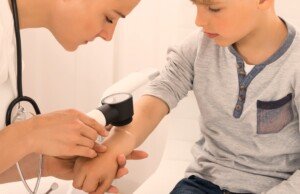 How young is too young for a child to get melanoma?

Children CAN develop melanoma — the deadliest type of tumor that can arise from a type of skin cell known as the melanocyte: a pigment producing cell.

“There is no age that is too young to develop melanoma as a child,” says Dr. Joel Schlessinger, MD, a dermatologist with a private practice in Omaha, NE.

“In my practice I have seen melanoma in many young patients and have one 17-year-old who nearly needed to have an amputation due to melanoma of the toe.”

What’s with the increase in melanoma cases in younger and younger people, including children?

This seems to contradict our evolutionary biology; after all, ancient man spent hours every day smack in the sun, before umbrellas, tents, wide-brimmed hats and sunglasses were invented.

Researchers point to the intermittency of sun exposure as a risk factor for melanoma.

Intermittent blasts of sun exposure shock the DNA and damage it, causing changes that can, over time, give rise to melanoma.

Dr. Schlessinger continues, “Sadly, we are now seeing a huge spike in melanoma cases due to indoor tanning and the trend of tanning before proms, weddings and all other events.

“Additionally, damage to the skin as well as moles is being done on a daily basis when going to tanning booths.”

Tanning booths are not safer than the sun; in fact, their dose of radiation is much more concentrated, which is why you can get burned in just five minutes.

“Eventually, many moles become what is called ‘dysplastic’ or unusual under the microscope and to the eye.

“These moles can ultimately end up turning into melanoma, but they don’t have as great a chance if the skin is protected.”

There is a strong correlation between childhood protection from the sun, and low incidence of melanoma later in adulthood, as well as during childhood.

Next time you’re tempted to encourage your pasty-faced child to “get more sun,” think of “get some color in your skin” as synonymous with “get some melanoma in your skin.”

Moles that are present since birth are more likely to develop melanoma, says Dr. Schlessinger.

If your child has congenital (since birth) moles, this doesn’t mean they all must be removed.

However, the parent should keep a close watch on these moles in their child for any signs of melanoma.

Don’t obsess and live your life in fear, though. Just make sure you know your child’s moles, and have a dermatologist evaluate them once every year or two.

“Dermatologists frequently encounter moles that are ‘on the fence’ and at that time may choose to either carefully observe them or remove them,” continues Dr. Schlessinger.

“There are some moles that are both congenital and quite large that simply can’t be removed.

“These are frequently the ones that are the most concerning of all and need to be evaluated on a yearly basis.

“Dermatologists may look at parts of them by biopsy or perform a small incision to test them.

“Additionally, there are tools to magnify the mole without having to do a biopsy, known as dermoscopy.

“Many dermatologists have these tools and can perform an initial evaluation of the mole using this technology.”

All in all, melanoma is still very rare in children, but this rarity is no consolation to parents who find out that their child has melanoma, especially when the disease was caught later, rather than sooner, when it was much more treatable, even curable.