Holding onto Treadmill in Front with Incline: Why This Fails

Clinging to the treadmill in front while using even a high incline is bad for the body, even if you have a condition; here’s why.

When you use an incline, do you tug with each step?
The ultra-vast majority of people who use a treadmill incline, especially high, hold onto the bar in front. Usually, this is a tight hold, sometimes a so-called death grip or “hanging on for dear life,” as it’s often described.

Often, the user “walks” in a tugging motion.

This incorrect use of a treadmill is a choice, even though the user may think it’s physically necessary.

The only time tugging on a treadmill is necessary is when you have the speed set too fast for what you can handle!

The woman below was tugging like mad when I took this photo. Her feet were slapping down with each step. 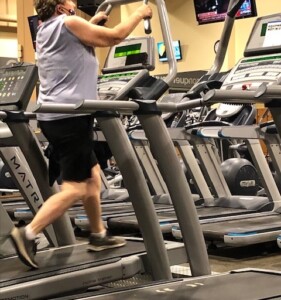 I asked an orthopedic surgeon with over 40 years’ experience what she thought of this.

“Just looking at this photo, I can’t imagine how this developed,” begins Barbara Bergin, MD, board certified orthopedic surgeon at and co-founder of Texas Orthopedics, Sports & Rehabilitation Associates.

“It strikes me as a weird, mechanically unsound mode of exercise, akin to walking deep knee bends with weights in the hands, or kettlebell jumping jacks.

“These are exercises designed to somehow give an extra bang for the buck, but often result in repetitive stress disorders.

“This is likely causing a kind of leaping gait, as the person tries to pull themselves up, and then they drop to the surface.”

Dr. Bergin also notes that aggressive or forceful tugging can cause repetitive strain injuries in the lower body.

Though the man in the top image, and the woman in the second image, were doing their make-believe walking at a fast clip with a tight hand grip, this doesn’t mean that the solution is to loosen the grip or try not to slap down the feet.

Even with a more relaxed body or a slower speed, “It’s certainly unnatural,” cautions Dr. Bergin, “and it seems like it would put some strain on the shoulders, as well as higher impact pressure on the legs. It’s so far from natural human movement.

“The closer we get to natural walking, the better.”

Does this mean that walking on a treadmill without holding on is still bad for the body?

No, of course not. For instance, walking without holding onto the front or anywhere else pleasantly forces the body into correct gait patterns and posture.

What if it hurts somewhere unless you hold on?

This means that the discomfort, whether it’s in a foot, hip or low back, originates from weak, unconditioned structures that are not being given a chance to get strong because you keep holding onto the machine!

Holding on deprives that area of beneficial work!

A very effective way to strengthen weak areas is to make them work in a capacity that they’re not efficient at: walking an incline without gripping the treadmill.

Usually, any discomfort that arises, when one uses an incline without holding on, is located in the low back.

When you continue to hold onto the front bar, these neglected low back muscles will continue to be weak.

Letting go of the front bar will force these muscles to adapt and become stronger, because they’ll be forced to keep your spine upright (body vertical).

If you have a bad knee or painful feet, maybe you shouldn’t even be on a treadmill until the problem resolves.

If it’s permanent, then holding on may make the situation worse, in that holding on, even during a high incline, skewers gait pattern, making you walk with an unnatural gait that puts unnatural stress on the hip joints.

The hips over-rotate to compensate for the immobilized upper body.

The human body naturally swings an opposite arm with the opposite leg while walking — and even crawling.

When you hold onto the treadmill, especially when this involves a tugging motion from the front, unnatural forces are applied to the pelvis: not good.

In addition, the foot strike is altered, which can lead to or aggravate foot issues.

I’ve worked with many personal-training clients who were perfectly healthy yet held onto a treadmill simply because they thought they’d fall off otherwise.

What is the solution?

SLOW DOWN. Don’t think for a moment you’ll sacrifice some of the workout if you reduce the speed and LET GO.

Fast speed does not equate to a good workout if you’re gripping and pulling with your arms.

In 100 percent of the cases, my clients remained steady on the tread after freeing their hands, and immediately felt many more muscles being worked.

Nobody stumbled, let alone fell off.

Other Reasons Holding on Is Bad

The calorie counter will run up the same numbers whether you hold on or pump your arms. This little computer is based on only two metrics: speed and incline. It cannot tell the difference between a 300 pound man or a little mouse on the tread.

Holding onto the treadmill’s front bar, console or even side rails during an incline will sabotage your attempts to reach your goals.