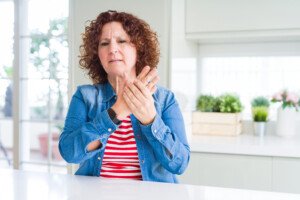 Here is what a doctor says about the difference between fibromyalgia joint pain and that from rheumatoid arthritis.

“With rheumatoid arthritis the pain is localized predominantly in the hands as opposed to the larger joints being more affected in fibromyalgia,” says Jacob Teitelbaum, MD, medical director of the Fibromyalgia and Fatigue Centers nationally, and author of “The Fatigue and Fibromyalgia Solution.”

“In addition, rheumatoid arthritis has red [and tender feeling] swollen joints, where there is no swelling or inflammation in fibromyalgia,” adds Dr. Teitelbaum.

The hands (or feet) of someone with rheumatoid arthritis have a distinct appearance that certainly does not look painless. Fibromyalgia does not alter the appearance of any joints.

Rheumatoid arthritis can affect the knees, hips and shoulders when it progresses, but not as commonly as does fibromyalgia.

The stiffness of rheumatoid arthritis is made worse also by extended periods of inactivity such as sitting in front of a TV.

Just what does the pain of fibro feel like?

“It feels predominantly like widespread achiness, but in time progresses to include neuropathic sharp burning pains, and sometimes even the skin sensitivity to touch,” says Dr. Teitelbaum.

Can it feel anything like “sore” muscles that one experiences after a hard gym workout?

“It actually can feel like that, but amplified many-fold, all over your body, and without going away.”

Another difference in the way rheumatoid arthritis makes the body feel when compared to fibromyalgia is that with the former condition, the patient may have a fever or feel feverish.

Both fibromyalgia and rheumatoid arthritis can make the patient feel fatigued.

A worst case scenario is when a person has both of these conditions.