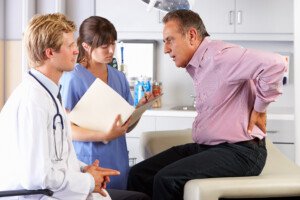 Find out what’s involved in surgery to treat a herniated (bulging) disc.

A herniated disc is common in the general population, but not all cases produce symptoms.

When symptoms do develop, they include the following:

There are numerous non-surgical treatments for a herniated disc. These are tried first before it becomes clear that surgery is the only option left.

Surgery is often an anxiety-driving prospect, but when conservative treatments fail after being given a fair time trial, then a microdiscectomy is the only recourse.

Surgical Repair of a Herniated Disc 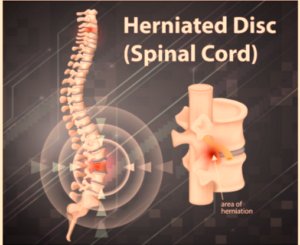 “What we’re doing is called a microdiscectomy and it takes about 45 minutes to an hour to perform,” says Dr. P. Justin Tortolani, an orthopedic surgeon and spine specialist with University of Maryland St. Joseph Medical Center.

General anesthesia is used to guarantee that the patient will not make even the slightest movement during the procedure.

“It’s accomplished through a small incision and generally, patients are discharged the same day with a two to three week recovery period.  Their daily activities are restricted somewhat,” says Dr. Tortolani.

“Specifically, what is done is to create a small window opening in the spinal column and that’s called foraminotomy, and then after that the portion that is herniated is removed or excised.

“Usually we’re not touching the remainder of the disc itself and just removing the portion that is herniated.”