Why You Get Paralyzed During Sleep and Why It’s Harmless 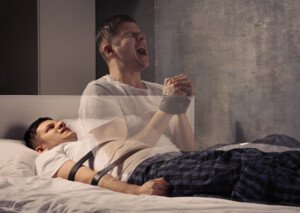 Don’t be frightened of “sleep paralysis,” but instead, embrace it!

Have you awakened in the morning to find that your body is totally paralyzed?

“Almost everyone has had the experience of being jerked awake just as they are falling into light sleep,” says Anthony P. Geraci, MD, associate professor of neurology at Donald & Barbara Zucker School of Medicine in New York.

“It feels as if someone has shaken you awake.  These jerks are common and a normal part of the earliest stages of sleep and they are called hypnogogic myoclonic jerks.

“Not to worry – these occur as a part of the center of your brain, called the thalamus, starts to shut down your motor system.

“This occurs as a protective mechanism, and in fact we are essentially paralyzed during about 75 percent of normal sleep.”

It’s believed by researchers and physicians to be a protective mechanism against physically acting out our dreams.

However, it’s only fair that I mention that those who are authorities on out-of-body experiences (astral projection) believe that sleep paralysis is either the astral body re-entering the physical body, or, it’s a launching pad for an astral projection.

Now you can be a skeptic, but here’s a phenomenon that I can’t explain with my OWN sleep paralysis:

Every single time I have sleep paralysis, it follows a lucid flight dream! I find it extremely odd that my SP has never, ever followed a regular dream.

These lucid flight dreams of mine are spectacular in terms of imagery and experience, and I always feel that these excursions actually happened.

I have been told by those who’ve had out-of-body experiences that these are astral projections. I’d sure like to think so.

I can pop in and out of SP once it runs its course (a few or several minutes). If I wait too long to pop back into it, the window of opportunity for this closes.

Bottom line: Sleep paralysis does NOT mean anything is wrong with your body.

Dr. Geraci adds that myoclonus jerks do not happen during deep sleep.

“They can happen to some people during light sleep stages such as REM (rapid eye movement), but if you experience these occasionally, just roll over and go back to sleep.

“You’re just fine and these movements have nothing to do with your muscles.”