How Does Surgery Cause a DVT? 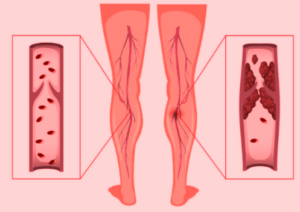 A vascular surgeon explains why most DVTs form during surgery rather than during the immobility after the surgery.

The estimate for annual U.S. deaths from pulmonary embolism (which begin as a deep vein thrombosis) ranges from 50,000 to 200,000.

“The difficulty is that you will never know the exact numbers unless you did an autopsy on everyone with sudden death, which is not a practical thing,” says Seyed-Mojtaba Gashti, MD, a board certified vascular surgeon with Broward Health Medical Center in Florida.

“So most of these numbers are estimates, and in my opinion are very conservative.”

Immobility is a major risk factor for a DVT.

This is why after knee replacement surgery, for example, the patient wears surgical stockings and their legs are wrapped in a special device that encourages increased blood circulation at varying intervals.

I was surprised to learn, though, that most DVTs form at the time of surgery. My mother had a DVT in her neck following bypass surgery.

People who take long airline flights in which their legs are crammed immobile in a small space are warned to guard against DVT.

Dr. Gashti explains, “During surgery, especially when you are under general anesthesia, you are completely paralyzed, so you not only are immobile, but also not have any of your muscle tone (muscle pump) that would help with movement of the venous blood from the extremities, thus causing stasis which can lead to DVT.”

When I told my mother this (long after she had recovered from the bypass), she asked why, then, don’t people develop DVT overnight during sleep.

Well, I’m not a doctor, but my response was based on common sense:

Though some people claim they don’t move at all while asleep, and even awaken seemingly in the same position that they were in when they went to bed, there are still many minute muscle movements and minute shifting while they are asleep.

There may also be myoclonus incidents – sudden jerking of a muscle.

If you’ve ever seen time lapses of people sleeping overnight, they indeed change positions many times. I’ve observed my parents while they were fast asleep.

It’s never long before a foot twitches or a hand or whole arm moves, even though they are asleep.

Sleep is a natural, necessary process, and nature would not have engineered it to cause a DVT.

Symptoms of a Deep Vein Thrombosis