Why Coughing Every Several Minutes Can Be Caused by Anxiety 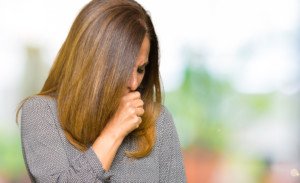 You may already know that anxiety can cause frequent coughing, but do you know just how this happens?

Perhaps your coughing is similar to what I experienced during a horrible time of my life.

At some point amid tremendous anxiety, I developed a cough.

I had to cough literally every several minutes due to an itchy, tickly feeing in the back of my throat that I couldn’t ignore.

I’d try to resist coughing, but sooner or later, the urge to clear up that itching and tickling became too strong.

Often, the cough would bring up what appeared to be tiny droplets of saliva.

This went on for several days and I knew it was somehow related to my anxiety. I had no other symptoms that would normally go with a cough.

During the times I was transfixed on my computer with deadline work, I noticed that the cough was suppressed. I also never had it while in bed or during exercise.

One of my stressors was a pending colonoscopy because I was experiencing sudden onset diarrhea and a change in stool caliber that was leaving me dehydrated and thinking colon cancer.

Two days before the colonoscopy, my beloved dog had to be euthanized after we incorrectly thought his brain cancer was retreating.

He had quickly taken a turn for the worse and became deranged three days before the colonoscopy. The stress of everything was unbearable.

The coughing every several minutes accompanied me straight to the colonoscopy procedure room until I lied down.

When the procedure was over, I sat, the doctor told me everything looked normal, the sedatives rapidly wore off, and I realized that the cough was gone. And I mean completely gone. It never returned.

“Your stress, like many others, can cause acid reflux,” begins Dr. Stacey Silvers, MD, of Madison ENT & Facial Plastic Surgery in NYC, who is board certified in otolaryngology (ear, nose and throat).

“Stress increases stomach acid; this acid refluxes up into the back of the throat.

“The result is: postnasal drip to coat the throat from the acid, and a swelling around the opening of the esophogus.

“That swelling will tickle the vocal cords and cause a chronic dry cough and throat clearing.

“Ninety percent of all patients presenting with these symptoms have a stressful event or more than one that occurred when the symptoms started.

“Postnasal drip is only a reaction to the reflux and acts as a protector of the throat from the stomach acid which is a pH of 2.

“This mucous and postnasal drip is why people do not have classic burning symptoms.

“The postnasal drip and resulting swelling from the reflux can trigger a cough, however.

“It is not from the sinuses or from sudden onset of allergies.  It is very common and very commonly misdiagnosed and mistreated.

“When the stressor goes away (normal medical study, successful move, successful job change or adjustment to the death of a loved one or pet), the symptoms often go away.

“During the symptoms, however, reflux medication will stop the postnasal drip and therefore cough.”

If you find that you’re coughing every several minutes but don’t have accompanying cold or allergy symptoms, ask yourself if you’ve been under an acute attack of severe anxiety.