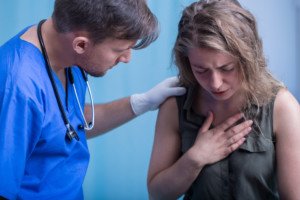 Chest pain is frightening and if you’re in the ER, there’s a test you’d better request.

A test that research shows is very reliable for detecting a heart problem.

The best test, shown to be effective and safe, is the CTA (computed tomographic angiography), says a long-term study.

If you come to the ER with chest pain, you should have the CT angiogram done, says University of Pennsylvania School of Medicine research.

But ER doctors don’t always order this test for patients coming in with chest pain – certainly not in the case of my mother, who I took to the ER because of her chest pain. The CT angiogram was not ordered!

However, 5-15 percent are actually having heart attacks or some other cardiac issue.

Over half are admitted to the hospital for observation and further testing (such as my mother after her second ER visit two days later; she had not had a heart attack).

Her next test was an echocardiogram to see if she was suitable for a treadmill stress test.

The echocardiogram was “abnormal,” so the next step was the invasive and risky catheter angiogram … which showed dangerously blocked coronary arteries; two hours later she was in the OR undergoing quintuple bypass surgery.

The CT angiogram is much safer in that it doesn’t carry the risks of blood clots, infection, stroke and cardiac arrest, like the catheter angiogram does, though these complications are rare.

The CT angiogram offers a faster and less costly way to determine which ER patients have had a recent cardiac problem.

“The ability to rapidly determine that there is nothing seriously wrong allows us to provide reassurance to the patient and to help reduce crowding in the emergency department,” explains Judd Hollander, MD, the study’s lead author, professor and clinical research director, UPSM’s department of emergency medicine.

Of the 481 patients in this study who had negative CT angiograms, meaning, no evidence of seriously blocked coronary arteries, none of these patients had heart attacks in the year following their exam, and none had bypass surgery or even stenting.

How much does an ER CT angiogram cost?

About $1,500. But admit a patient to the hospital for telemetry monitoring and stress tests?

This often happens to patients who turn out not to have any serious coronary blockage, and could have been avoided with the quicker, much cheaper CT angiogram.

“The evidence now clearly shows that when used in appropriate patients in the ED, we can safely and rapidly reduce hospital admission and save money,” explains Dr. Hollander.

Perhaps a “national coverage decision” is just around the corner that will “facilitate coronary CTA in the emergency department,” adds Dr. Hollander.